I’ve been testing my Coffee Tree Monitor for several days now. Specifically, I’m testing the ability to use a liguid crystal light valve (LCLV) to limit the amount of light that reaches the TSL2561 lux sensor, which has a maximum lux sensitivity of 40,000. Sunlight can reach roughtly 120,000 lux.

My method of testing is to perform the following, in order:

I’m not sure if this is caused by my code, the meter hardware, the software (arduino library) used to read the meter, or a natural phenomenon. But it is interesting!

Maybe direct sunlight, at any time of day, is greater than 40,000 lux and what I am seeing in the 0 - 14184 range is in the morning, while the meter is shaded or during cloudy times, when direct sunlight isn’t reacying the sensor.

Update October 22, 2017: The sensor’s max may be ~14184. After reading further, there is some speculation as to exactly what the max is. In the library provided by Adafruit for this sensor, there is the following line of code: 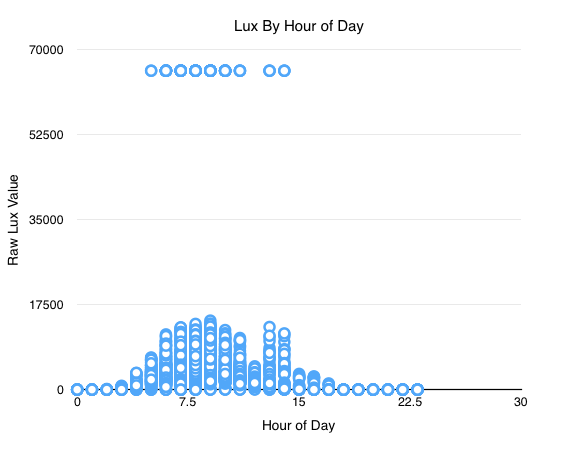