We’ve just returned from a wonderful trip to Vietnam. The main reason we went was to visit coffee farms in the mountains north of Dalat but we also spent a couple days in Ho Chi Minh City to visit with a few people.

We stayed in Thien An Hotel in Dalat. The rooms are clean and inexpensive and breakfast is included. It’s run by Le Ngoc Anh, who is very responsive to emails and extremely helpful. Through Mr. Anh I was able to arrange for a taxi to pick us up from the airport so we didn’t have to worry about any language problems or getting ripped off by a cabby. We also rented a motorbike from the hotel for $6/day…a steal by any standard. The bike was a little 100cc automatic, very common there but a little underpowered for riding two-up in the mountains.

About Dalat. At the airport, we disembarked the airplane straight onto the tarmac and the second we were outside we breathed in absolutely fresh, mountain air. It was surprising just how fresh it was, given that we were standing on a airport tarmac.

Dalat has a very European look and feel to it. This photo was taken from Train Villa Cafe, overlooking Dalat: 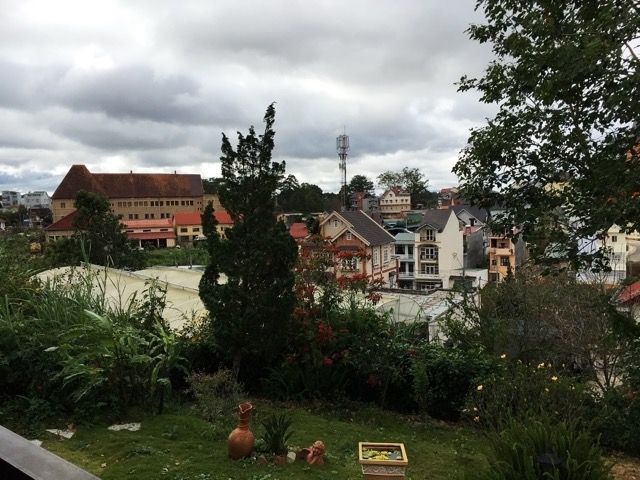 The architecture of Đà Lạt is dominated by the style of the French colonial period. Đà Lạt Railway Station, built in 1938, was designed in the Art Deco architectural style by French architects Moncet and Reveron, although it incorporates the high, pointed roofs characteristic of the Cao Nguyen communal buildings of Vietnam’s Central Highlands. The three gables represent an art deco version of Normandy’s Trouville-Deauville Station. The station’s unique design—with its roofs, arching ceiling, and coloured glass windows—earned it recognition as a national historical monument in 2001. The Dominion of Mary (French: Domaine de Marie) Church and Convent, home to Roman Catholic nuns of the Mission of Charity, were built in 1938 with a similar pointed-roof style.

Our guide/host for the day was Josh, an American and his Vietnamese wife Rolan. Rolan is a member of a minority ethnic tribe called K’ho Cil, which is a matriarchal tribe in the mountains just outside of Dalat. The K’ho Cil are smallholder farmers and Josh and Rolan are working to organize a large group of them into a coffee co-op. Such organization will allow them to pool resources such as knowledge, labor, equipment, and most importantly, bargaining power.

The first morning of our trip, Josh met us at the hotel and lead us from there to his house on the motorbikes. There we got to know one another over a few cups of coffee made from their beans just recently harvested. Rolan showed us some of the clothing she had knitted and others she weaved. The K’ho are artisans known for their weaving and knitting skills, which they use to make items for trade and barter with other local tribes. She also played a couple of songs for us on her t’rung, a traditional vietnamese xylophone made of bamboo. I didn’t get a picture of Rolan and her t’rung, but here is a similar setup (they come in various styles):

After having a few coffees and talking a bit about how the co-op works, we bundled up and hopped on the motorbikes for a ride into the mountains to see other farms in the Luoyang district, just north of Dalat.

The ride was spectacular. I didn’t expect to see evergreen forests in Vietnam but that’s exactly what we saw for half our ride up the mountain. The mountain road was curvy and an enjoyable ride on the motorbike with very little traffic, allowing us to take in the view. At one point, exactly when we crossed into rainforest and out of evergreen forest, the fog came in thick and low. It got so thick and soupy that visibility was less than ten feet.

Once we arrived, we briefly met the family of farmers and then they set out fishing in their pond and slaughtering a chicken, both for our lunch. While they did that, we took a hike through various coffee plots headed towards a large waterfall. Along the way we saw steep hillsides covered with coffee.

Once we could hear the waterfall we had to leave the road and hike down a steep, overgrown hill to get to the waterfall and it turned out to be a bit more difficult to navigate than we anticipated so we didn’t make it all the way to the main waterfall, which we were told is seven stories high, but what we did see was beautiful and very peaceful.

Once we returned from our hike, the fish and chicken were both cleaned and ready to go on the fire and some veggies had been gathered for a clear broth veggie soup. The food was cooked on an open fire pit in the kitchen and we all sat around the fire for warmth and talked while we drank tea and Vietnamese beer (333)

We were very honored to be able to sit around the fire and have lunch with Rolan’s family. It was such a wonderful experience that showed us the hospitality and generosity of the K’ho people. We’ll have fond memories of this trip to last a lifetime!

I have a more coffee-geek-centric post of the same trip on my coffee blog: OilSlickCoffee.com.