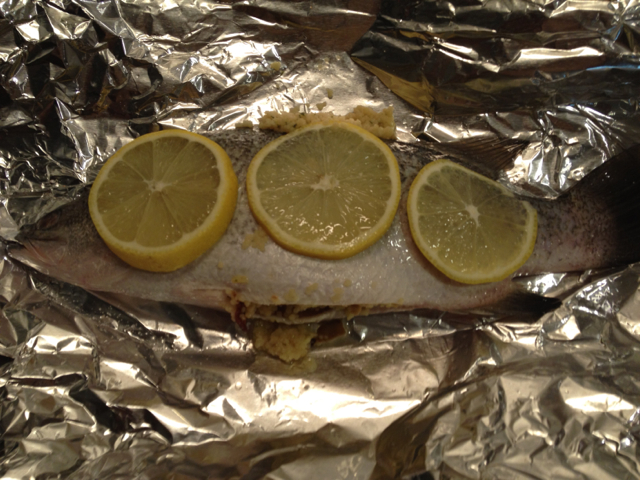 Circle In The Round is a two disk box set consisting of outtakes spanning fifteen years of Miles’ career. Because the songs are arranged in chronological order, you can listed to them and follow his development over the years. It has tracks written by Dizzy Gillespie as well as Cole Porter, who was born in my hometown, believe it or not.

While Miles does his thing, start the couscous. Follow the directions on the box with the exception of adding a tablespoon or so of the bouillon once it boils, then add your couscous. The MSG (crack for the tongue) in the bouillon is the secret ingredient.

While you’re waiting for the water to boil and while the couscous itself is cooking, you can chop the bacon into small bits and get it in a hot skillet. Once it’s close to done and the pan is nice and greasy, toss in the onions and mushrooms and brown ‘em. You can substitute turkey bacon for less flavor and less fun. Your call.

In a separate skillet, using a very low heat, brown the pine nuts. Just throw them in the skillet and shake them until they even out into one single layer and take your time and keep an eye on them. They can burn fast and easily and burned pine nuts suck. Shake ‘em around in the skillet every so often to get both sides of most of them browned nicely.

The bacon/onion/mushroom goodness now goes into your finished couscous. If the mushrooms soaked up all that good bacon grease, you can add some olive oil to the mixture to get everything slippery and mixing well. Fold in the pine nuts as well.

I like to cover a cookie sheet with tin foil so that clean up is easier, then prepare the fish right on the covered cookie sheet.

The sea bass should be at room temp, rinsed and patted dry with a paper towel (water acts as a heat sink, absorbing heat that should otherwise be dedicated to cooking your fish). Salt the inside of the gut cavity and the outside of the fish then stuff the cavity with some couscous, some slices of lemon, and some sliced garlic.

Bake the fish for about 30 minutes or until it’s done (flakes easily with a fork and looks, well, done).

A good side dish would be asparagus with mushrooms, onions and more of that bacon. Do the bacon first, then mushrooms and onions as before, then at the last minute throw in the asparagus (don’t overcook the asparagus, it’s best with a little crunch).