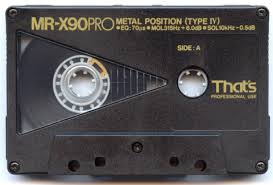 My favorite brand of blank tapes was That’s. They were heavy and took a beating in the glove compartment and they had great audio quality. I liked the 90’s because you could pack the music in compared to traditional cassettes that gave you 46 minutes total.

My online mixtapes fit on a C46, simply because the smaller format is better for a ton of Youtube clips in one post:

First we’ll ease into it:

Personally, I gotta have some Black Keys and this is a pretty good remix from Wet Paint:

It wouldn’t be summer without a shark attack

And to stick with water/beach theme, some Waves:

I was only recently introduced to these guys at a local coffee shop. Pretty clever song:

Lobotomize the first 15 seconds or-so of this song and it gets good:

This one’s a bit dark and brooding, but the video is badass:

“Two words, rock, chalk, shot a jayhawk, never been to jail ‘cause I never get caught”

Almost by default I’m a huge fan of anything Jack White is part of: